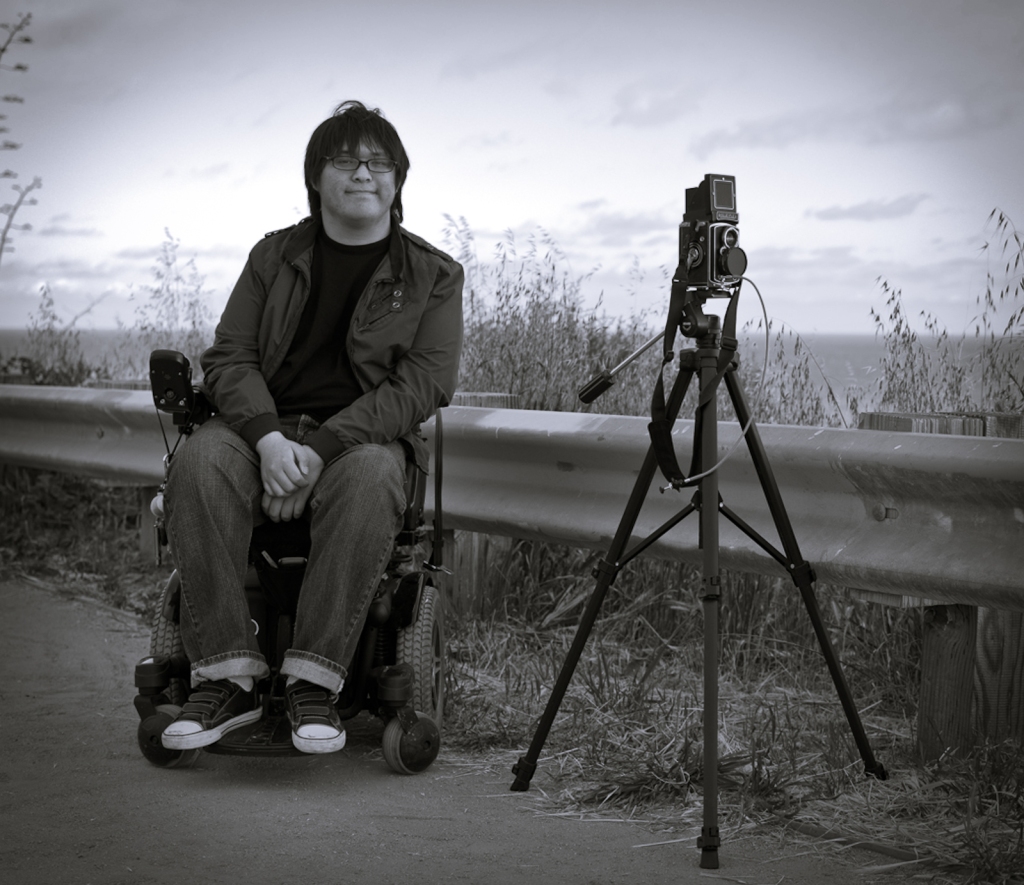 David Kwock is a photographer who operates in Long Beach California. A disabled person, Dave relies on his power chair for mobility due to an injury he sustained around 2006 which left him a quadriplegic. Despite his disability, being in a wheelchair does not deter him from executing his ideas. Highly influenced by classic horror films and comics, Dave channels his imagination through the lens of his camera by photographing dramatic landscapes and fusing them with still-life photographs of action figures as seen in his series “My World”. Dave is also adept in other forms of photography including portraiture, product, and long exposure photography.

In the year 2006 through 2008, I became quite ill and for a long time I’ve been in and out of the hospital. The condition I have is Spinal Stenosis, a tightening of the spinal canal in the vertebrae. Over time with the combination of violent neck movements caused by Tourettes Syndrome which I developed at the age of five, I slowly lost motor control of my entire body to the point of quadriplegia. For awhile my education took a back seat while I was recovering from my condition through intense physical therapy. Though I was able to graduate high school on time through self studies, my dreams of becoming a field marine biologist were shattered due to my physical condition. I always hoped to be hands on in whatever field of profession I took on but for quite some time I never thought it could ever happen. Then came the year I enrolled in my first Photography class in the Spring of 2009. At first I thought what a fun hobby to partake in, little did I know this class was the gateway for restoring my hopes and dreams. In the beginning of my photographic journey I found it still difficult, not being able to develop my own film rolls without assistance was a bit of a drag. Still the process was fun and engaging so I pressed on as my interest in the art grew. It wasn’t until my second time of taking a color photography class that I realized what genre of photography I favored. In creating long exposures, I learned the virtue of patience and further improved my photographic technical understanding. I would learn more important skills and lessons further into my photographic education but no moment was as memorable. During this time and forward I’ve become more active, constantly seeking photographic opportunities. Being in such beautiful locations for long periods of time was therapy for me. I found myself happier than ever despite my condition and more importantly I found myself more meaning to living life. Photographing long exposures has allowed me to absorb the beauty of the world around me. Instead of capturing a scene looking through a tiny eyepiece, I was able to do what I have always wanted to do, which was to explore. As my camera was exposing, I would follow a small trail, go up a tiny hill or wherever my wheelchair would allow me. Being allowed to do this made me realize that just like anyone I can’t have it all but I’ve learned to greatly appreciate what little I can have.

Dave is currently attending California State University Dominguez Hills in pursuit of his Bachelors Degree in Art & Design. He is expected to graduate in the Spring of 2018…

From Within (group exhibition) The Art Exchange, Long Beach CA 2017

All works featured on this site belong to David Kwock Photography & Design©.